They are one of the Japanese idol groups who started as an idol group on 21st August 2015. They are teenage and early 20s at the moment. Although most of Japanese idols smile all the time, they do not. This group is different from other just cute idols, so I like them.

“Silent Majority” is their first song. I think this lyrics represents Japanese culture and also encourages for those who have dreams. This is really cool, not like an idol’s song.

At an intersection full of people
Where are you going? (Pushed by the flow)
Wearing similar clothes
With a similar expression …

This scene seems Tokyo especially Shibuya? We can image easily like this scene. We see many people wearing similar clothes, for example businessmen wearing suits and women wearing sober and simple clothes. Especially in the morning and evening, many business people are walking with eyes dead.

As if hoping to get lost in the flock
Walking (without doubt)
Why do they hesitate to be different from others?

Japanese people don’t prefer something different from others and to do different thing from others do.  Why do they care about that? I think this part of lyrics represents that.

The people ahead turn around and say
“Do not break the line”
They preach of rules, but
their eyes are dead

The people ahead turn around and say can be older people than you, your parents, and your friends. They say to you “do something following the correct rules. Do the same as others”. This is as if individuality is not important. But the people who teach you has eyes dead. It means if you follow them, you will be same as them.

You have the freedom to live your own way
Do not be controlled by the adults
If you give up from the beginning
What were we born for?

Sometimes dreaming can make you lonely
Go the path without anyone
Nothing will start even if flocking
Are you OK with all “Yes”?
Silent majority

This is the chorus of this song. The tempo gets faster and lighter, it seems to express positive. I really like this part. This part makes us think about our life. We don’t need to do same things as others do. It’s really boring, isn’t it? To keep the dream is difficult, but why were you born? The author asks us. It’s necessary to say Yes or No clearly, otherwise your opinion will be ignored.

Richard Nixon, 37th President of the United States, said “the great silent majority of my fellow Americans…….” in his speech. If we don’t say anything, it means Yes, he said. This situation can happen in our life, also the election.

We have the right to choose everything, which is important. If you express nothing, people cannot know your opinion. Especially Japanese people are not good at saying something clearly, but sometimes it is significant to say it.

You just do what you want to do
Don’t become ONE OF THEM
There are as many ways as there are people here
Just walk towards your dream
Adults being kept in chains of aesthetics and pride
Leave behind the boring adults like that
The future is for you
Say No! to them!
Silent majority

This is the second chorus. The tempo gets faster and lighter again, this is advice to young people. Don’t  become one of them=Graduate from silent majority! You can do what you want to do, just do it!

Someone else
If you just follow them
You won’t get hurt, but
The flock
Has just one mind, then
You will be made one of them

It’s safe and easy to follow someone else, but is it ok to be ONE OF THEM? Just to follow the rules makes your life easy, but your identity and individuality will be disappeared.

You have the freedom to live your own way
Do not be controlled by the adults
If you give up from the beginning
What were we born for?

Sometimes dreaming can make you lonely
Go the path without anyone
Nothing will start even if flocking
Are you OK with all “Yes”?
Silent majority

This is a repetition of the first verse…

Go on your own way, don’t hesitate to do something different from others!

This song encourages us like above. This is for young people and also adults who lost their individualities. Young people can choose their life by themselves, the adults can change their life from now, too.

I really love this song. When someone else say something bad about my life, it doesn’t matter at all. My life is mine. I noticed that when I heard this song. 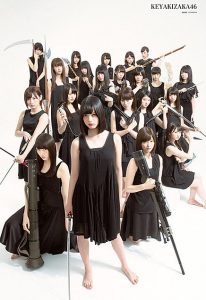 It's written in English and Japanese!日本語と英語で書いてます！ Hey guys~~ It's mi(*'▽') What do you t...

Heyyyy it's mi・ω・ I have been to Shibuya Scramble Square which has 47 floors and a rooftop!! This building opened on ...

Hi!! How are you?? I'm hungry!! I introduce my favorite 3 meat restaurants in Tokyo today. I have been to many mea...

Which University is famous in Japan?? 日本の有名大学といえば??

Hiiii!! It's mi!! Japanese university is two types such as National and public universities 国公立大学 or private universi...
Sponsored Links
【Tokyo Travel Guide】14 places you should visit in Tokyo!! 東京で行くべき14の観光スポット！
Which University is famous in Japan?? 日本の有名大学といえば??