Advantages are these are much cheaper than private universities. You can study various sort of subjects you want to study. And there is full of great facilities.

Disadvantages are the admission examination is difficult. You have to study many kinds of subjects hard before the exam. That is why these universities’ level is high.

★ is approximate level of the university. (There is a difference in deviation value depending on the department.)

Advantages are there are many various departments and clubs. The campus is fashionable and unique.

Disadvantages are private universities are basically expensive. There are some ways of admission, the level of students can be different.

The top private universities are Waseda university or Keio university. These are very famous universities. The level of SoKeiJochi is almost same as former Imperial Universities.

(G)MARCH is initials of these universities. In fact, the aim of many high school students is (G)MARCH or higher university than (G)MARCH.

These universities are almost same level as GMARCH. While GMARCH are around Tokyo, KanKanDoRitsu are located in the west of Japan.

These are only women’s university. They have long history, too. The level is almost same as (G)MARCH. It is said that to graduate these universities can be advantage when looking for work.

Normally a university is composed of 4 years. The students are busy to study, hang out with friends, work as a part time staff after school, and join some clubs. Basically they have to take an exam or submit a report 2~4 times a year depending on the class. Regarding clubs, there are many kinds of clubs such as a sports club, traveling club, study club, and so on. Intercollegiate clubs are interesting. They can have 1~2 months vacation twice a year. They start looking for a job at the end of the third year of college. When the graduation ceremony, male students wear suits and female students wear Hakama, which is kind of Japanese traditional kimono. 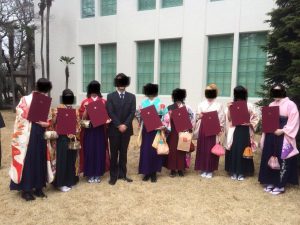 Educational Background seems to be still important in Japan

Konnichiwa!! I am mi :-P When you travel abroad, where do you buy souvenirs?? You buy them for your family, friends, ...

Japanese Common Sense is Not Common in the World?! 日本の普通が世界の普通じゃない?!

Confirmed cases of Covid-19 in Japan are more than 13,000, but It is gradually decreasing at the moment. Although it...